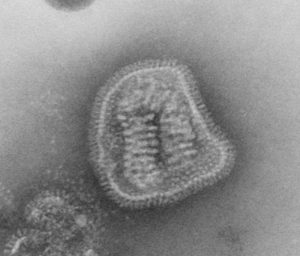 A negative-stained transmission electron micrograph (TEM) depicting the ultrastructural details of an influenza virus particle. Photo courtesy of the CDC.

The possibility of pandemic influenza arising from the avian influenza virus, H5N1, is of critical importance for global public health.   The need to safeguard the health of the poor and to provide fair access to needed medicines, diagnostics, and vaccines has put patent systems at the heart of the debate.   How do patents impact development and commercialization of products targeted against major world diseases?   Does the use of patents as a part of strategy to inventivize commercial development adversely and disproportionately affect some nations and populations?  Do internationally shared public health goals – such as addressing pandemic influenza – require different treatment of patents than public health challenges that are regional in nature?   Virtually all of the discussion of this topic occurs in the absence of a clear and transparent body of evidence.

The most strongly voiced concern is whether patents claiming influenza genomes, genes or proteins will compromise equitable access to products that are derived from them.    It is not surprising that the nations most strongly affected by avian flu are most deeply concerned about their ability to respond to current and projected public health needs.   Global health officials and national authorities seek clarity in the terms of access to health interventions to address pandemic influenza.   To address this concern, a factual basis for how much of the influenza genome, especially of the H5N1 virus and its derivatives, has been patented or has patents pending is needed.

If the extent of influenza genome-related patents can be determined, and their claims and impacts can be analyzed, then their potential effect can be meaningfully discussed and modeled.    To do this type of comprehensive analysis of genome-related patents will require a many avenues of investigation, new tools and diverse approaches.  The results of one component of this analysis – identification and interpretation of influenza sequences in claims of United States patents and patent applications – is presented in this landscape.   It is part of a wider study initiated by World Intellectual Property Organization (WIPO), and has been funded in part by PATH Vaccine Solution.  Other complementary approaches are reported on the WIPO web site.    Using the tools developed in this study, the next stages will examine critical jurisdictions whose patent systems are much less navigable.

The patent landscape determined by sequence analysis has yielded some key findings:

In doing this study, it has become clear that we face a serious limitation with the virtual impossibility of searching patents in many of the countries currently impacted by Avian Influenza. These Asian countries are also potential hot-spots for the evolution of a pandemic influenza strain. Some of them have expressed profound concerns about the extent of patenting over inventions derived from strains they may contribute to the international influenza efforts. In general, however, the patent offices in South, South East and Eastern Asia, do not have text searchable patents.

Of necessity therefore, this study has been restricted to jurisdictions which have such searching capabilities or report filings of patent applications to international organizations, such as the European Patent Office, that disseminate the data. In so doing, we hope to at least see which players with international ambitions may be pursuing patent protection over influenza genome – related inventions, to better focus particular targeted searches through this means.

These countries are in a key position to create a basis of evidence from which to evaluate the merits of these concerns and to develop remedies should these concerns be validated in their countries.  In furtherance of this aim, we have been extending the Patent Lens search and analysis capabilities to internationalize and make ready to incorporate data from these critical jurisdictions as they become available – and extend the methodology of this first draft landscape to the new data.

Even for those jurisdictions with some searching facility, finding DNA or protein sequences disclosed in or claimed in patents is extraordinarily difficult if not impossible.  We also appreciate that there are many techniques for filing invention disclosures that render the searchability of DNA or protein sequences very difficult, including filing PCT applications with ‘image-based’ sequence files that require optical character recognition (OCR). Thus, this study has stimulated an accelerated program within Patent Lens for improved OCR of sequence files from PCT applications.