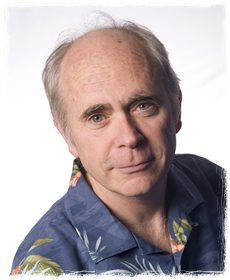 Richard Jefferson was born in 1956 in Santa Cruz, California and began his molecular biology career in 1974 at the University of California, at Santa Barbara, obtaining his Bachelor’s degree in Molecular Genetics from the College of Creative Studies in 1978.

He conducted his Ph.D. studies at the University of Colorado, Boulder, where he developed the reporter gene system GUS (ß-glucuronidase) and co-developed transformation methods for the nematode C. elegans.

In 1985, with an NIH fellowship, he moved to the Plant Breeding Institute (PBI) in Cambridge, England, where he adapted the GUS system for plants and agriculture. The GUS reporter gene system – through active distribution to thousands of labs – is now arguably the most widely used tool in plant molecular biology.

GUS has been instrumental in developing efficient transformation of such crop plants as maize, wheat, rice, soybean and cotton, and was critical for the commercial development of many of the highest-profile innovations in agriculture.

While working at PBI, Richard also initiated and managed the world’s first field release of a transgenic food crop on June 1, 1987. In 1989, after United Nations consultancies in Africa, he joined the Food and Agriculture Organization as the first senior staff Molecular Biologist. He left the UN System in 1991 in order to establish Cambia as an autonomous private research and development institute, initially in the Netherlands.

In 1991, Cambia became responsible for trouble-shooting the Rockefeller Foundation’s ongoing programs in rice biotechnology in Asia. As a base for this work Richard and Cambia’s core team moved to Australia, where Cambia was registered in 1994 as a not-for-profit company limited by guarantee.

In conducting the work for the Rockefeller Foundation, the UN, the CGIAR, and other international agencies, Richard has travelled and taught extensively in the developing world, with numerous working visits to China, India, Indonesia, Vietnam, Pakistan, the Philippines, Thailand, Brazil, Colombia, Kenya, Zimbabwe, Egypt, Nigeria and many other countries.

From 1999-2001, he also served part-time as Director, Strategic and Applied Molecular Technologies for the International Institute of Tropical Agriculture (IITA) of the CGIAR, based in Ibadan, Nigeria.

Richard’s work has been cited in the primary literature over 12,000 times. In the course of his career, Richard has given more than 400 invited seminars in over 35 countries, and has been plenary or keynote speaker at numerous international symposia.

In the last decade, Richard’s expertise in innovation systems and intellectual property strategy and policy have become widely recognised. Amongst many UN consultancies, he was appointed by the United Nations Convention on Biological Diversity as Author-in-Chief for the landmark study on Genetic Use Restriction Technologies (“GURTs” or “Terminator” technology).

Richard was chosen as an Outstanding Social Entrepreneur by the Schwab Foundation and is a regular participant and panelist at the World Economic Forum Annual Meeting at Davos.

In December 2003 he was named by Scientific American to the List of World’s 50 most influential technologists, and cited as the World Research Leader for 2003 for Economic Development. He received the American Society of Plant Biologists (ASPB) “Leadership in Science Public Service Award” in July 2005, and that year was finalist as Wired Magazine’s Rave Scientist of the Year.

He is recognized as a pioneer in new democratized innovation and intellectual property mechanisms as the founder of the biological open-source initiative called BiOS. Richard has been profiled in The Economist, New York Times, New Scientist, Newsweek, Financial Times, Science, Nature, Wired Magazine and many others.

In 2009, with funding from the Bill & Melinda Gates Foundation, the Lemelson Foundation, and the United Nations, Richard became Professor of Science, Technology & Law at the Queensland University of Technology, and Founding Director of the Lens.   With a focus on science-enabled innovation, Lens seeks to make the world’s innovation system more transparent, inclusive and navigable.  In 2012, Richard became affiliated with National Information and Communication Technologies Australia (NICTA) as Rogue Group Leader, and Director of The Lens.

Richard is a dedicated musician, composing and performing on guitar and mandolin, in Brazilian, blues and new acoustic styles.  He studied juggling and modern dance with the USA National Juggling champions, Airjazz, and still keeps these skills alive when time allows.   His family established and manages a small heritage apple breeding property in Googong, NSW.

Richard is married to Osmat Azzam Jefferson, a plant pathologist, Professor and Principal Scientist at Cambia, and has an 11 year old daughter, Tanja.