There are several scales by which to measure the efficiency of algae as a source of biofuels. The resources used by algae include water, land, solar energy and CO2. The two most important of these are land and water efficency.

Fresh water is a crucially important resource that is not sufficiently available in many places in the world. fresh water will become more scarce in the future. 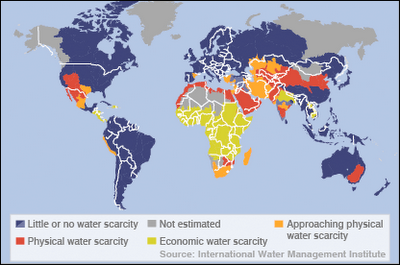 Algae have two advantages regarding water use. They can be grown in bioreactors, which drastically reduce evaportation and allow water to be reused. Closed bioreactors use ~1000x less water than required for conventional crops (solarbiofuels website).

Algae also grow in water that is currently not usable for other purposes, and is available in large supply. These include saline water, as well as waste water or other contaminated water sources. Above ground saline water sources are marked on the above map in light blue. In addition, there are large supplies of saline groundwater.

Wastewater is widely available. One of the problems with wastewater is that it is full of nutrients which disrupt natural water systems. Often nutient rich wastewater will allow algal blooms that choke out other life. If the algae blooms were captured in bioreactors rather than allowed to occur in the river or ocean, two problems could be solved at once.

Many biofuels also compete with valuable natural ecosystems. It is clear that ecosystems such as tropical rainforests are extremely important for the function of the climate system. These systems are already under threat from food production systems, and adding to this competition by biofuel production is not a sustainable approach.

The advantages of algae are two. First, it can be grown on non-arable land, so it will not compete with food production, and will not incentivise the destruction of natural systems. Second, algae uses space very efficiently, so it might be able to provide fuel production even in locations where land costs are high, such as cities.

Here is a map of light energy striking the globe.

Light capture efficiency, or absorption efficiency, is the ability of an algal community to capture incident light energy. Absorption efficiency, Ae  is a spectral matching parameter developed to quantify the relationship between the light absorption spectra of phytoplankton communities and the spectral irradiance of their ambient light field. Ae is defined as the ratio between the amount of radiation absorbed by the phytoplankton in situ and the amount absorbed in a spectrally flat light regime.
(Journal of Plankton Research Vol.23 no.12 pp.1373-1384, 2001)

After the algae capture the light, it is important to know how efficiently it is used for biomass, hydrogen production, etc..

Many algae have chlorophyll antennae optimised to maximize light capture in low conditions of low light intensities. At higher intensities, this results in excess capture of photons, and the energy is released by fluorescence. At high light, the wt chlamy fluoresces as much as 90% of absorbed energy. By reducing the antennae size, individual alga in cultures do not capture more photons than they can use. As of the end of 2007, Melis has improved light utilization efficiency of absorbed light to 15% from 3% by manipulating the chlorophyll antennae.

Hydrogen production:
For economic viability, increase efficiency from 0.2% photon to H2 conversion efficiency at 20W/m2 illumination to ~7-10% at 230W/m2. Current efficiency is ~1.0% from light to H2 and 2% to biomass.

The H2 gas produced in Ben’s mutants has a purity of ~90-95% and typical yields are 500ml H2 for a 1 litre culture (10days; 110W illumination). Energy requirements as a percentage of the energy contained in the delivered hydrogen

Methane production (From biomass):
150-300 tons per ha per year biomass in bioreactor and lower in open pond. This biomass theoretically yield 200,000-400,000 m of methane per ha per year.