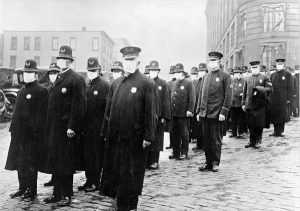 Policemen in Seattle wearing masks made by the Red Cross during the influenza epidemic in December, 1918. Photo courtesy of the National Archives and Records Administration.

Influenza is a contagious disease of mainly the upper respiratory tract (nose, throat, bronchi) and is caused by a virus.  The virus is passed from person to person by viral particles present in aerosols generated by sneezes and coughs.  In most people, the infection is short-lived, about one to two weeks, and typically people recover on their own without complications.  In the very young, elderly and people having other diseases, influenza can take a more severe course and lead to complications and even death.  For such people, yearly vaccination is indicated. Influenza rapidly spreads around the world in seasonal epidemics, with new strains arising in East or Southeast Asia, traveling to Australia and other parts of Oceania, to Western Asia and Europe, to North America, and finally to South America where the strain dies out (Science, 2008).  Each year a new strain or strains become the infectious agent.  Different strains represent the result of minor genetic changes in the influenza gene sequences.

Two different influenza viruses cause human disease:  influenza A and influenza B.  Three subtypes of influenza A are important for humans:  A(H3N2), A(H1N1) and A(H1N2), of which A(H3N2) is currently associated with the most deaths. The H and N are shorthand for two proteins, haemagglutinin (H) and neuraminidase (N), located on the surface of the virus.  Most recently, there have been limited outbreaks of A(H5N1) virus, which has been transmitted from birds to humans.  The H5N1 virus is potent, it is highly contagious in birds and can be deadly to them, moreover, over half of the people that contracted this influenza have died.  Most of these people have been in direct or close contact with infected poultry. In general, H5N1 remains a very rare disease in people and does not appear to readily spread from person to person.

Nonetheless, because all influenza viruses have the ability to change, public health officials and scientists are concerned that A(H5N1) virus could change to become infectious and contagious in humans.  If A(H5N1) virus were to gain the capacity to spread easily from person to person, there is a likelihood of an influenza pandemic (worldwide outbreak of disease) could begin. Based on statistics from past influenza pandemics, and the known morbidity of the few cases of human A(H5N1) disease, a high death rate and a very large number of deaths could occur.  To limit these disastrous consequences, specific vaccines are being developed. Vaccination is the principal way of attacking influenza, for many reasons antiviral medications are not generally used.

For more information on influenza, H5N1 virus and pandemics, see

Photo Caption:  Policemen in Seattle wearing masks made by the Red Cross during the influenza epidemic in December, 1918. Photo courtesy of the National Archives and Records Administration.