In US 2005/0079608, the inventors propose a method to isolate adult stem cells.  A cell population containing committed progenitor cells is transformed with a construct comprising a telomerase promoter operably linked to a selectable marker.  Because stem cells express telomerase, the introduced telomerase promoter is expected to be active.  By growing the transformed cells under selecting conditions, an enriched population of adult stem cells can be obtained. 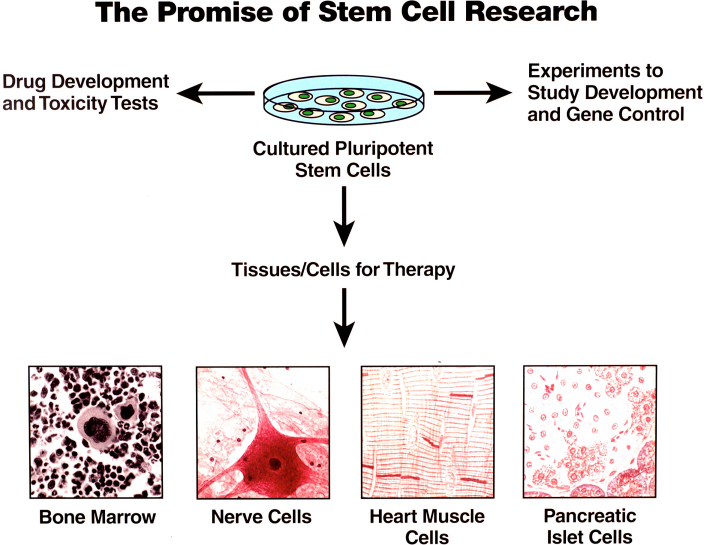 US 6,645,763 B2 claims a specific, immortalized bone marrow mesenchymal stem cell line.  The line was made by transforming human adult bone marrow mesenchymal cells, which were commercially obtained, with a retroviral vector that contained hTERT-encoding sequences inserted between a pair of site-specific recombination sequences (e.g., LoxP).  The cell line was demonstrated to differentiate into osteoblasts and into adipocytes.

One of the very difficult cell types to propagate in culture is neural cells.  Moreover, damaged brain or spinal cells are largely incapable of significant self-repair.  The plight of Christopher Reeve dramatically underscored this problem.  One impediment to scientific and medical advances is the scarcity of adult neuronal precursor cells.  Other clinically-important progenitor cells in the brain, such as progenitors for oligodendrocytes, spinal cord motor neurons, midbrain dopaminergic and cholinergic neurons, are also resistant to propagation in vitro.  In early 2004, Roy and Goldman published a break-through set of experiments in this area (Roy et al. 2004).  Lineage-restricted progenitors of the central nervous system (CNS) in fetal spinal cord were transformed with a retroviral vector that over-expressed hTERT.  The immortalized cells gave rise to phenotypically restricted subpopulations of either glia or neurons.   Importantly, the cells differentiated into neurons when implanted in xenografts.  The method used to generate the immortalized neural progenitor cells is claimed in US 7,150,989.

Cartilage degradation is a feature of osteoarthritis and rheumatoid arthritis.  Degradation results in joint pain and impairs mobility.  Sufferers of these diseases may even need a wheelchair to get around.  Some limited progress has been made in propagating and differentiating chondrocyte precursors.  Unfortunately, the sources of these cells are limited.  The patent application US 2003/0109038 addresses this problem by disclosing a method to obtain human chondrocytes by differentiating them from embryonic stem cells.  The embryonic stem cells are induced to undergo general differentiation and then coaxed along the chondrocyte differentiation pathway by culturing them in the presence of factors.  Further, the cells can be immortalized by transformation with an expression vector containing telomerase-encoding sequence.

Obesity is a disease of “epidemic” proportions and one of the most significant health problems in industrialized countries.  Consequently, more scientific investigation has been directed to all aspects of adipocytes biology, including adipogenesis.  While there is plenty of fat tissue in obese people, adipocytes make up about a third of the cells, the other two-thirds comprise blood vessels, nerve tissue, fibroblasts and preadipocytes in various stages of differentiation.  Preadipocytes are not easily distinguished from fibroblasts.  Even when preadipocytes are isolated and cultured, they senesce and also lose adipogenic potential.  US 2005/0008621 is directed to methods for generating primary preadipocyte strains that have increased replicative potential and also maintain adipogenic capacity.  One of the methods that is claimed and demonstrated in the application is to transform primary adipocytes with sequences encoding hTERT and select for those that express hTERT.

Many other patent applications, not discussed in detail here, disclose methods for obtaining pluripotent stem cells and, once obtained, increasing their lifespan by transformation with hTERT-encoding sequences.