Stem cell biology is both a fascinating area of research and a controversial one.  When hearing the term “stem cell”, most people think of embryonic stem cells, cells that are immortal and also have the potential to differentiate into any of the specialized cells that make up the body.  For this reason, it is hypothesized that stem cells may become the basis for treating a variety of diseases, including Parkinson’s disease, traumatic spinal cord injury, Alzheimer’s disease, heart disease, diabetes, and muscular dystrophy.

Embryonic stem cells are isolated from embryos that develop after in vitro fertilization.  At four to five days post-fertilization, the embryo has formed a hollow ball of cells called the blastocyst.  The blastocyst includes three structures:  the trophoblast, a layer of cells that forms the exterior surface; the blastocoel, the hollow cavity in the blastocyst, and the inner cell mass, which is approximately 30 cells clustered at one end of the blastocoel.  The cells of inner cell mass are the embryonic stem cells.  These cells are removed and are cultured without differentiating.

In September 2006 the United States Patent and Trademark Office granted requests for re-examination of patents held by the Wisconsin Alumni Research Foundation (WARF) on human embryonic stem cells.  The requests were filed by the Public Patent Foundation (PUBPAT) on behalf of the Foundation for Taxpayer and Consumer Rights (FTCR) a nationally recognized not-for-profit consumer organization on the grounds that the patents are invalid and their existence is causing significant public harm.  In the press, various representatives of PUBPAT and FTCR have stated that they consider the patents overly broad, impede scientific progress and are driving stem cell research overseas.  After the time period which allows WARF the opportunity to file a statement and PUBPAT and FTCR to file a statement in response, the Patent and Trademark Office will proceed to determine whether the patents are invalid in light of the issues raised.

One of the hallmarks of embryonic stem cells is the high expression of telomerase.  The expression of telomerase permits embryonic stem cells to escape senescence (Thomson et al.1998).  As discussed in the Background of this paper, very few normal cell types express telomerase in sufficient quantity to overcome the Hayflick limit to proliferation.  Once the telomerase sequence became available, introduction of nucleic acids encoding and constitutively expressing telomerase was quickly adopted as a means to immortalize cells.  For example, ectopic expression of hTERT has been shown to immortalize human skin keratinocytes, dermal fibroblasts, muscle satellite (stem), and vascular endothelial, myometrial, retinal-pigmented, and breast epithelial cells (see review by (Shay and Wright 2005).  In some experiments, expression of hTERT increased the proliferative capacity of cells but did not lead to immortalization (Migliaccio et al. 2000; Di Donna et al. 2003). 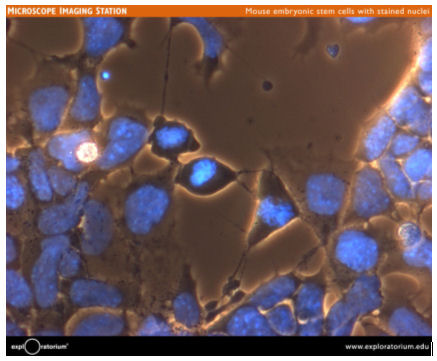 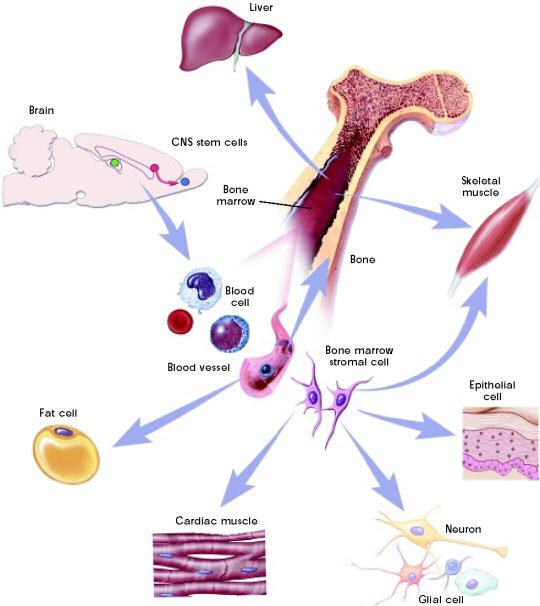 Even when somatic stem cells can be identified, a downside to using them in therapeutic procedures is the difficulty in growing them in cell culture and manipulating them to generate the desired specific cell types.  Hematopoietic stem cells on the other hand have been exploited since the 1970s in bone marrow transplants.  Rarely are the stem cells isolated, instead whole bone marrow is transplanted.  In fact, only recently has it been possible to identify and isolate hematopoietic stem cells (see Chapter 2 in (2006).

Some progress in growing somatic stem cells has transpired from immortalizing the cells by introduction and expression of exogenous telomerase.  The most spectacular success occurred in lineage-restricted progenitors of the central nervous system – the neuronal-restricted progenitor cells derived from human fetal spinal cord were immortalized by overexpression of exogenous telomerase, and furthermore they matured into neurons upon xenograft to rats (Roy et al. 2004).  In other reports, immortalization of human hematopoietic progenitor cells (Akimov et al. 2005) and immortalization of mesenchymal progenitor cells (Zhang et al. 2006), differentiation capacity of the cells was either not thoroughly investigated or was lost.

The substantial interest in and research on stem cells and their potential therapeutic benefits is also reflected by numerous filings of patent applications.