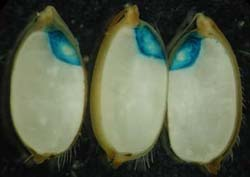 GUSPlus™ is a new reporter gene for use in molecular biology. There are GUSPlus vectors for checking transformations and screening transformants, and special vectors for use with TransBacter strains. The GUSPlus gene was originally isolated from Staphylococcus sp. but has been extensively altered by codon optimisation for expression in plants. It is described in Nature 433:629ff and in patents and patent applications including US patents 6,391,547, 6,641,996, 7,087,420 and 7,141,719. Issued in Australia as Patent Number760275. Issued in New Zealand as Patent Number 1485. Published as WO 00/055333 and WO 99/13085 and pending in Brazil, Canada, Europe and Israel.

The beta-glucuronidase (GUS) enzyme from E. coli has been widely used to study promoter activity in different tissues or developmental stages. Recombinant DNA constructs are made in which the reporter gene (GUS) is attached to a promoter region of interest and the construct transformed into a cell or organism. However, it has some limitations that are overcome by a second generation of GUS gene developments at CAMBIA, which we are now making available in open source licenses. The GUSPlus gene was originally isolated fromStaphylococcus sp. but has been extensively altered by codon optimisation for expression in plants.

CAMBIA has now developed vectors that include GUSPlus.

GUSPlus is a more sensitive reporter gene than E.coli GUS

We have established efficient plant transformation protocols relying on screening transformed tissue using GUSPlus. Previous attempts to use a beta-glucuronidase for non-destructive assays were hampered by the need to use high concentrations or long incubations with X-glcA. The new GUSPlus gene overcomes these problems. Download the X-glcA assay protocol.

The initial work on GUSPlus was carried out as a PhD project by Tuan Nyugen and a publication is expected soon. The work is being supported by the Rockefeller Foundation, Horticulture Australia and Monticello Research Australia.