Rice is one of the most important cereal crops and feeds more than a third of the world’s population (Khush, 1997). Rice is a monocarpic annual plant that usually grows between 1 and 1.8 meters tall with long slender leaves 50–100 cm long and 2–2.5 cm broad. Its small, wind-pollinated flowers are characteristic of grasses. The seed is a grain normally 5–12 mm long and 2–3 mm thick (see “Rice” in Wikipedia).

While rice is believed to have evolved around 130 million years ago (Chang, 1976), it is only considered to have been cultivated within the last nine thousand years (Patarapuwadol, 2005). There are two domesticated species: Oryza sativa, the most common, grown throughout Asia, Australia, the Americas and Africa; and Oryza glaberrima, grown on a small scale in western Africa.

There are three main varieties of Oryza sativa:

Within each variety, there are many cultivars, each favoured for particular purposes or regions. A japonica variety was the first to undergo genome sequencing, and is the focus of this landscape. 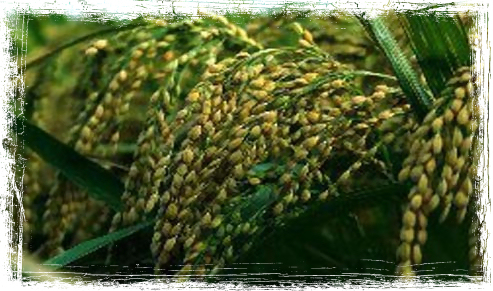 Apart from the two domesticated species of Oryza, there are a further twenty-one wild species. Nine of the wild species are tetraploid. The remaining species, inclusive of the two cultivated ones, are diploid. The International Rice Research Institute (IRRI) has registered and preserved over 80,000 varieties of rice. Of these, 76,000 are said to be O. sativa  (Jackson 1997). All varieties of rice have 12 chromosomes.

Rice has the smallest genome size of all common cereals (see table below, comparing Oryza sativa against that of other plants).

Who are the top rice growers in the world?