Sequencing of the Rice Genome

The genome was sequenced by both public and private groups, as described below. 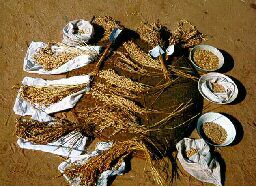 1. Public Efforts at Sequencing – the IRGSP

In 1997, a consortium of publicly funded laboratories called the International Rice Genome Sequencing Project (IRGSP) was established to map the rice genome. The consortium includes labs from ten countries: Japan, the United States of America, China, Taiwan, Korea, India, Thailand, France, Brazil, and the United Kingdom. The IRGSP adopted the “clone-by-clone shotgun sequencing strategy” so that each specific position on the genetic map was associated with a sequenced clone. IRGSP’s policy is that all rice sequence data must be released into the public domain. In December 2004, the completed rice genome sequence was made available through the NCBI database.

Research such as the genome-sequencing project has provided a wealth of molecular marker data, together with phenotypic, ecological, and archaeological data and has significantly helped our understanding of the evolutionary history of the genus Oryza (Khush GS, 1997). It has also assisted efforts to assimilate useful genes from wild species to cultivated rice through inter-specific hybridisation. Organizations such as IRRI have been using this knowledge to help modify rice in an endeavour to reduce poverty and hunger and to improve the health of rice farmers and consumers.

More information about the IRGSP participants are provided on the next page of the landscape.

Private firms and other interested parties have also contributed to the sequencing of the rice genome. Key players in the private sphere were Monsanto, Syngenta and Myriad Genomics. Monsanto released all of its data into the public sphere, but not before they had filed patent applications on more than 200,000 sequences. Syngenta also released their sequence information, but not exactly in a timely manner. More information about the role of these companies is provided later in this landscape.