The Basis for Hybridisation Language

DNA is a biological polymer consisting of “simple” repeated subunits, or bases.  It is within the sequence of these bases that genetic information is stored. Although DNA can exist as a single strand in solution, it is generally found within living systems together with its complementary strand (see the figure below).  If we consider a simple representational diagram of a DNA molecule, consisting of a sequence of bases: A, G, C, and T. We can see that some of the bases interact with one another in the figure below. 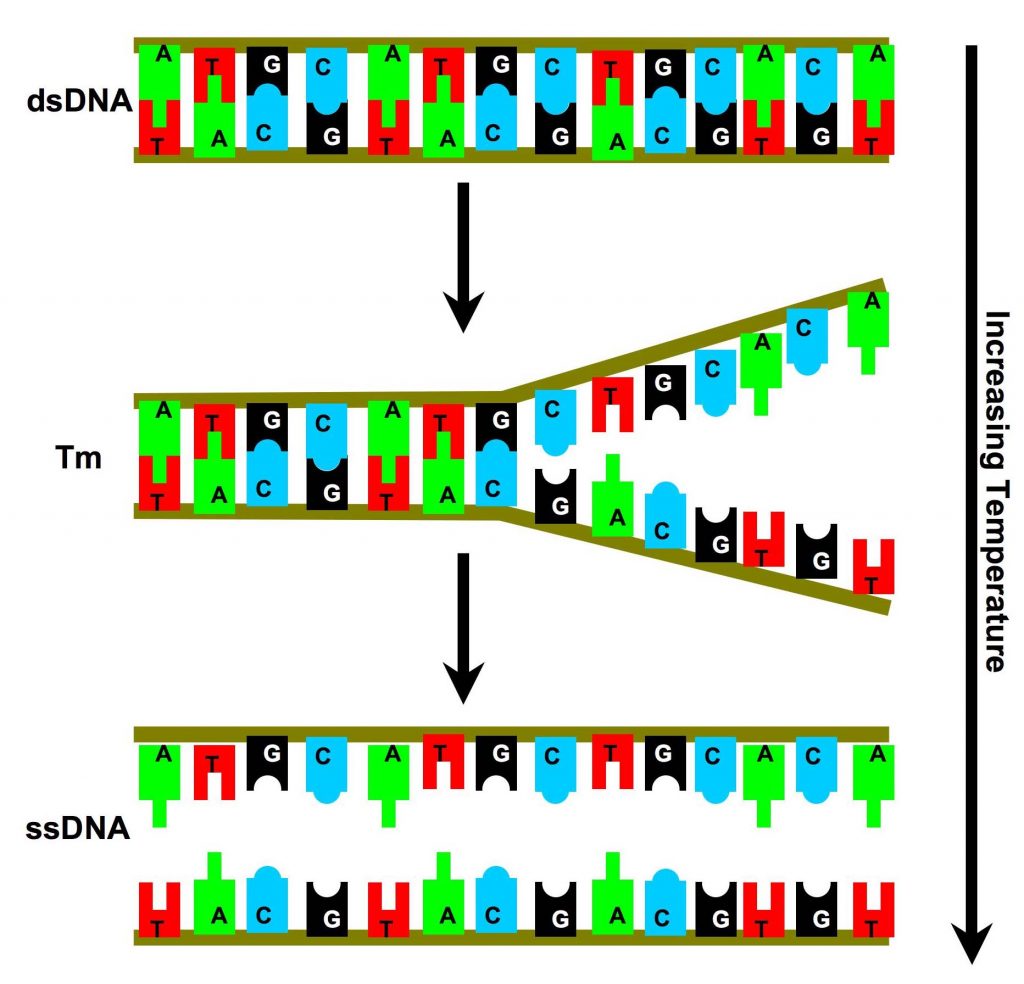 The bases A,T,G, and C form hydrogen bonds with their respective bases T, A, C and G, in the complementary strand.  These bonds provide a stability to the double strand DNA (dsDNA), under normal circumstances, preventing it from dissociating into single strand DNA (ssDNA).  Significantly, dsDNA can be “melted” to produce ssDNA under certain physical circumstances and can be influenced by many factors such as temperature, salt concentration, inorganic solvents, sequence composition, and (importantly) the degree of sequence similarity or missmatch between ssDNA molecules.

The Concept of Melting Temperature (Tm)

Mathematical relationships between the various physical parameters listed above and the melting point of DNA have been established.  Historically, the point at which 50% of the DNA molecule is ssDNA is referred to as the melting temperature or Tm.

The Tm for a DNA sequence in solution can be estimated via the commonly-used calculation:

Note:  A particular DNA sequence will have different Tm values under different conditions. This calculation is sometimes referred to as the effective Tm.

The fact that ssDNA can re-anneal to form dsDNA is used in the process called hybridisation.

NOTE that the Tm refers to the temperature at which 50% of the DNA is hybridized!

A typical hybridisation experiment consists of a number of steps:

If the probe (or query DNA) is similar enough to the target ssDNA (on the blot) then the probe will remain bound to it after the wash step.

“Stringency”, which is often use to determine the scope of the claims, refers to the concentrations and temperatures in steps 4-6 above. Strictly speaking, this should refer to the “stringency” of the wash step required remove unbound probe from the target sequences that are covered by the claims. The “query” is often a sequence mentioned in the claims section (as in the example given above).

Although the table below is not legally binding and indeed patent applications may use their own definitions of stringency levels, the typical usage is roughly:

Sometimes the patent examiner will require the applicant to stipulate the stringency conditions: high/medium/or low stringency, or specifying the [NaCl] and temperature of the wash conditions.  Few bother to give a reference with respect to Tm (a value that can be calculated). It is possible that the conditions defined as stringent in one patent document may not be as stringent as those defined in another!