The subdomain B of the 35S promoter harbors an enhancer element that increases promoter activity. Initially, enhanced transcription in transgenic tobacco plants was obtained by duplicating the region from the -343 position to the -90 position, which is upstream of the TATA sequence. The sequences involved in the enhancement of transcription were localized to a 162 bp sequence fragment, from -208 to -46 bp. Like other enhancers, this fragment can function in an orientation-independent manner when located either upstream or downstream of a homologous or heterologous TATA box. The region contains binding sites for cellular trans-acting factors such as ASF 1, GATA 1 and CAF. An increase in transcription activity from three-fold up to six-fold is reported in monocot plants transformed with multiple copies of the enhancer region.

The University of British Columbia was the initial applicant for several patents covering the use of a duplicated CaMV 35S enhancer sequence as part of a DNA construct for plant transformation. Monsanto Company is now the assignee of all the patents granted in the U.S. and in Canada . The assignee of the granted Brazilian patent is not identified, according to the information provided by the International Patent Documentation Center (INPADOC).  If you are aware of updated licensing information, please provide it to other users via our comments interface.

How is enhancer defined?

The applicant defines an enhancer as a sequence which activates transcription and contains repetitive units of short sequences from about 4 to 16 bp. A repetitive unit includes a GTGG, where G may be replaced by A in some cases. A “natural enhancer” is described as comprising a DNA sequence that is upstream from and within about 600 bp of a promoter. 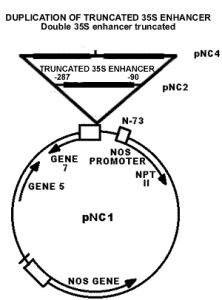 In all the patents, the claims generally cover a fragment of the 35S upstream region, defined as AluI-EcoRV fragment. This is described as a truncated 35S enhancer, from -287 to -90 position. In the U.S., the claims are directed to:

The Canadian patent claims the same type of DNA construct as the U.S. patents. Also claimed are:

In addition, there are broader claims that encompass a transcription initiation region with a plant or viral enhancer domain having four units of enhancer sequences and a promoter. A DNA construct comprising such a transcription initiation region is also claimed. The patent numbers and a summary of the independent claims of each patent are presented in the following table.