The discovery that the vir genes do not need to be in the same plasmid with a T-DNA region to lead its transfer and insertion into the plant genome led to the construction of a system for plant transformation where the T-DNA region and the vir region are on separate plasmids.

In the binary vector system, the two different plasmids employed are:

In general, the transformation procedure is as follows: 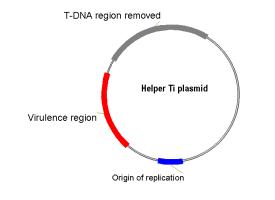 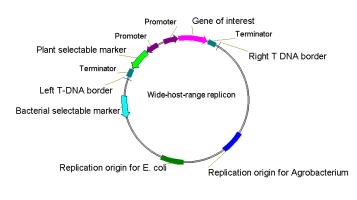 A possible disadvantage may ensue from the fact that the stability of wide host range replicons in E. coli and Agrobacterium varies considerably. Depending on the orientation, plasmids with two different origins of replication may be unstable in E. coli where both origins are active.

This vector system is most widely used nowadays. Different types of binary vectors have been devised to suit different needs in a plant transformation process.