Agrobacterium tumefaciens is a common soil bacterium that naturally inserts its genes into plants and uses the machinery of plants to express those genes in the form of compounds that the bacterium uses as nutrients. In the process, Agrobacterium causes plant tumors commonly seen near the junction of the root and the stem, deriving from it the name of crown gall disease. The disease afflicts a great range of dicotyledonous plants, which constitute one of the major groups of flowering plants.

In 1907, the bacterium was identified by Smith and Townsend as the causative agent of the disease, but it was not until the end of the sixties that a correlation between the tumor and the presence of genetic material of the bacterium was established (Braun and Schilperoort).

Between the 1970s and 1980s, some striking aspects were discovered about the biology, biochemistry, and molecular biology of Agrobacterium. Tumorous plant cells were found to contain DNA of bacterial origin integrated in their genome. Furthermore, the transferred DNA (named T-DNA) was originally part of a small molecule of DNA located outside the chromosome of the bacterium. This DNA molecule was called Ti (tumor-inducing) plasmid (Zaenen et al., Chilton et al.).

The Ti plasmid contains most of the genes required for tumor formation. Wounded plants exude phenolic compounds that stimulate the expression of the virulence genes (vir -genes), which are also located on the Ti plasmid (Wullems et al. , Hoekema et al.). The vir genes encode a set of proteins responsible for the excision, transfer and integration of the T-DNA into the plant genome. The genes in the T-DNA region are responsible for the tumorigenic process. Some of them direct the production of plant growth hormones that cause proliferation of the transformed plant cells. The T-DNA region is flanked at both ends by 25 base pairs (bp) of nucleotides called T-DNA borders (Zambryski et al.). The T-DNA left border is not essential, but the right border is indispensable for T-DNA transfer. 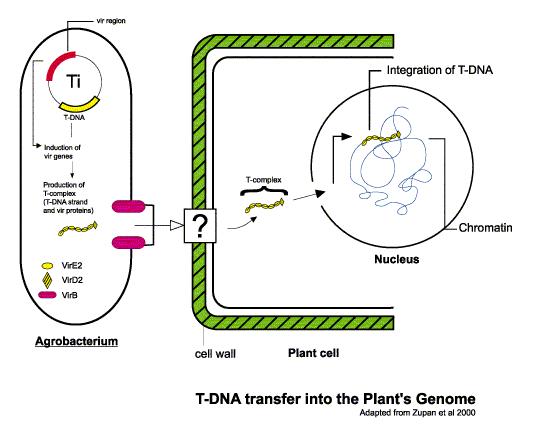 The study of Agrobacterium and its natural mechanism to alter the biology of infected plant cells sparked the design of molecules that would transfer genes of interest into plant cells. These engineered DNA molecules are commonly referred to as vectors. The starting molecules can be native Ti-plasmids present in Agrobacterium or native or modified plasmids from other bacteria known to deliver DNA into transformed cells.

The basic elements of the vectors designed for Agrobacterium-mediated transformation that were taken from the native Ti-plasmid: 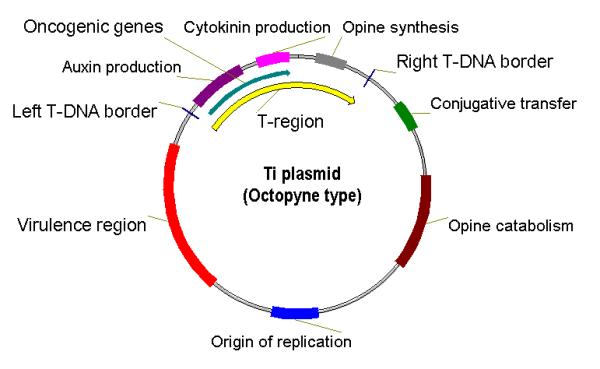 Although other methodologies for plant transformation have been devised, Agrobacterium remains one of the preferred mechanisms to introduce exogenous genes into the plant cells. One of the reasons for this is the wide spectrum of plants that are susceptible to transformation by this bacterium. Agrobacterium was initially believed to be restricted to the transformation of certain dicotyledonous plants (flowering plants with two cotyledons in their seeds and broad leaves) such as potato and tomato, but nowadays, transformation of monocotyledonous plants (flowering plants with one cotyledon in their seeds and narrow leaves with parallel veins), such as maize and rice is routinely performed.